Born in 1944 in Charleston, South Carolina, Gaines began his career as a painter, earning his MFA from the School of Art and Design at the Rochester Institute of Technology in 1967. In the 1970s, Gaines’ art shifted dramatically in response to what he would later call ‘the awakening.’ Gaines’ epiphany materialized in a series called Regression (1973 – 1974), in which he explored the use of mathematical and numeric systems to create soft, numbered marks in ink on a grid, with each drawing built upon the calculations of the last. This methodical approach would carry the artist into the subsequent decades of his artistic journey.

Working both within the system and against it, Gaines points to the tensions between the empirical objective and the viewers’ subjective response. The concept of identity politics has played a central role within Gaines’ oeuvre, and the radical approach he employs addresses issues of race in ways that transcend the limits of representation. His recent work continues to use this system with sociopolitical motivations at the forefront. ‘Faces 1: Identity Politics’ (2018) is a triptych of colorful portraits of historical icons and thinkers, from Aristotle to Maria W. Stewart and bell hooks.

Gaines reduces the images to pixelated outlines, layered among the faces of the preceding portraits to create a palimpsest of faces, employing this system in a critique of representation and the attachment of meaning to images.
Gaines lives and works in Los Angeles, where he is a member of the CalArts School of Art faculty. He has been the subject of numerous exhibitions in the United States and internationally, and his work is in prominent public collections including the Museum of Modern Art, New York NY, the Whitney Museum of American Art, New York NY, the Studio Museum in Harlem, New York NY and the Los Angeles County Museum of Art, Los Angeles CA. Gaines’ work was presented at the Venice Biennale in 2007 and 2015. 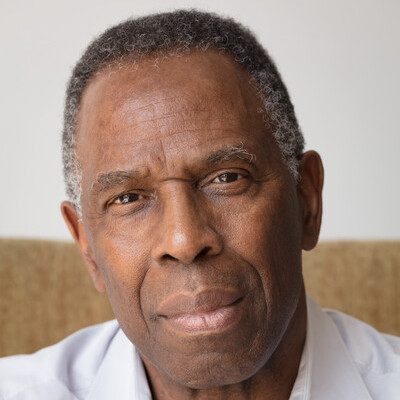