The Suns, Moons, and Circles of Ugo Rondinone 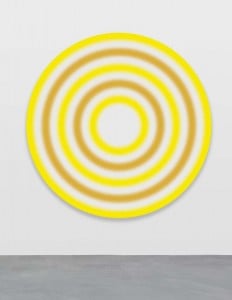 Ugo Rondinone is a Swiss-born mixed-media artist living in New York. His work frequently employs the experiential qualities of the everyday, often reflecting on the boundaries between fiction and reality. In Ugo Rondinone: Pure Sunshine, MA Contemporary Art faculty Morgan Falconer examines the main characteristics of the Target paintings (1992–2015) in relation to Rondinone’s work and biography. The following is an excerpt from that chapter.

On the simple premise of comparable appearance, it might be supposed that there is a common intention behind Ugo Rondinone's Sun Paintings and those of Kenneth Noland. Are they not both round? Are they not both abstract? The coincidence has been remarked on before. And yet much separates them. Noland evolved his most remembered sequence of work in the late 1950s, at the outset of Post-painterly abstraction and the close of the modern period. He worked them by hand and stained the color into the canvas. Ugo Rondinone, by contrast, birthed his pictures in 1991.

Of course, comparing artists that are decades apart is generally just as wrongheaded as comparing images that are superficially similar: contest is all. But before we place Ugo Rondinone more precisely in his own time, it is important to recognize that artists of his generation—and particularly those working in paint—have had a peculiarly strong relationship to modernism, its themes and concerns forming a pole against which they react and navigate. And that makes the comparison of Kenneth Noland and Ugo Rondinone instructive. Take the canonical reading of Noland: the critic Michal Fried would say (as he does in one classic account) that "structure, rather than color, bears the brunt of Noland's modernist ambitions." He has been "both driven and vitalized" by his work, spurred on in the knowledge that no formal solution can be definitive. For Noland, form is preeminent and always evolving and, notably, Fried takes pains not to fix our impression of the artist's motif, referring to his motifs not as "circles," but typically as "stain images [that] are centered in square canvases."

What of Ugo Rondinone? Well, interpretations of Fried's variety—the shuttling between formal description and history, the occasional exclamation about the work's transcendent quality—seem to bounce off Ugo Rondinone's circles, the pictures' repetitions offering none of the evolution formalists crave. Instead, it helps to go back to the artist's own words, since the descriptions he has supplied of his exhibitions provide important clues; their very simplicity and deadpan tone is revealing in itself. In one typical instance he describes the circles as "large-scale vertical spray-painted pictures of multi-colored concentric circles." In this respect, he is intriguingly similar to Fried (and Noland) in his reluctance to fix the motifs with metaphors like the sun, or the moon. (Ugo Rondinone will refer to his circular pictures as his Sun Paintings, but only for the sake of convenience and not out of any desire that the word "sun" describes them.) And yet their titling is crucial...

Morgan Falconer is a faculty member in the MA in Contemporary Art program, as well as Online courses and the Summer Study program at Sotheby’s Institute of Art-New York. He is also a critic and art historian. He has written about contemporary art for publications including The Times(London), The Economist, Frieze, The Village Voice, and Art in America. His recent publications include Painting Beyond Pollock (Phaidon, 2015), a history of painting after 1945, and The Art Lovers’ Guide to New York, a guide to the city’s art collections (Rizzoli/ Thames & Hudson, 2011).