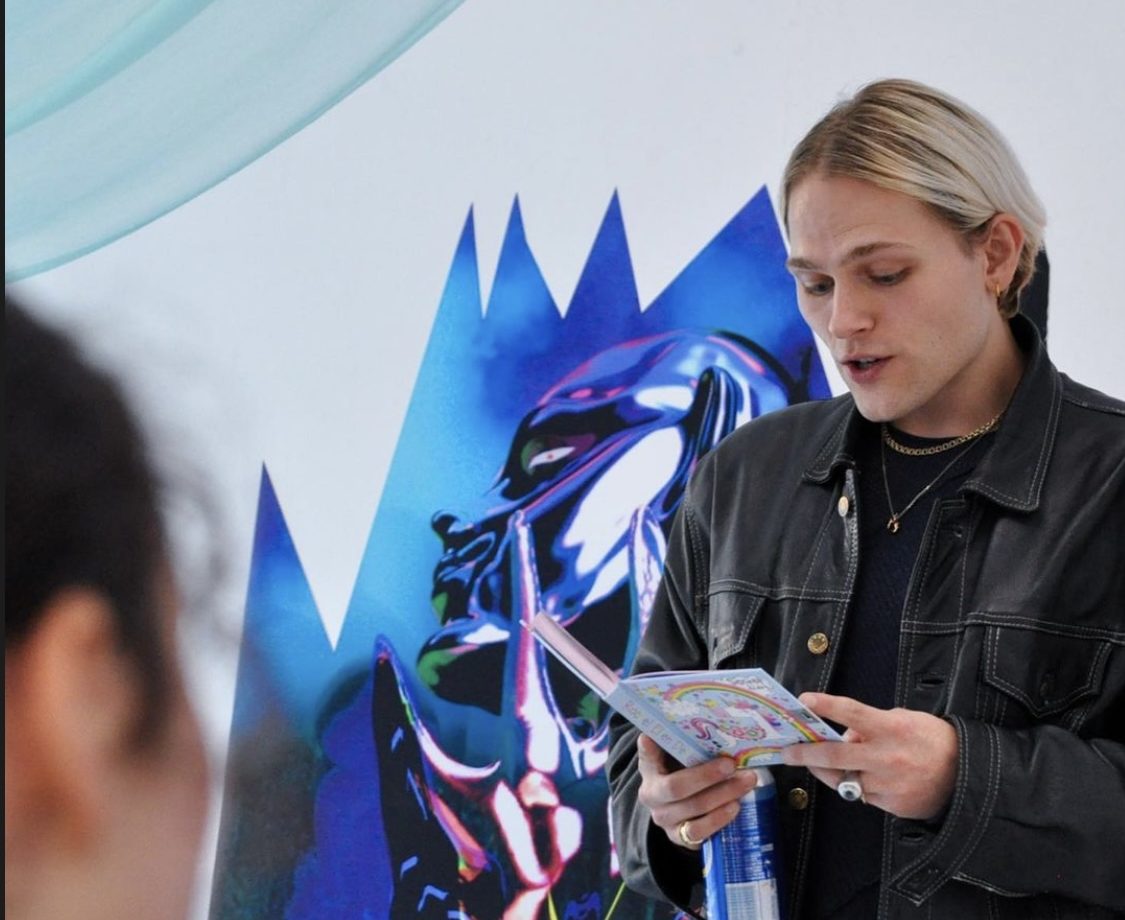 The title of this show was taken from the phrase “to be given the boot”. If you are given the boot, you are not wanted. Curated by Natalie Shanoff and Wenxin Wen, the show included works by Phillip Rhys Olney and Hyemin Gil, who explored people and experiences marginalized in today’s world. The show started outside the gallery with two sound pieces, recordings of motorcycle engines by Phillip Rhys Olney. These recordings, with their almost inaudible differences, were followed by a room with a series of photographs in which the artist reflected on his childhood, his experience of growing up with a father who was obsessed with motorcycles. Together the works formed a moving portrait. In the next room, the visitor was confronted by a site-specific installation by Hyemin Gil. A large suspended net had poems and other texts by the artist attached to it. The installation communicated our more elusive memories and senses. With melting ice cubes tied to the net, time flowed through the drops of water, wetting the sheets of paper. On the floor in the last room was a pair of old boots surrounded by piles of leaves. The show ended with a performance in which visitors were invited to walk around gallery space with mud on their shoes, leaving traces as witnesses of the show and the marginal figures that were celebrated in it.

Curated by Clara Greenfield and Mackenzie Montgomery, this show at the Cookhouse Gallery focused on the vulnerability of the body. The exhibition featured works by Chelsea College of Art MA artists: Aleksander Nærbø, Naïstini Valaydon, Coco WA and Shujing Huang. The artists’ works emerged from their personal relationships with their bodies and their thoughts on how society deems a body should look or act. Theatrically staged murals by Nærbø set the scene for his deeply personal performance piece Dear Diary, which dealt with issues from body dysmorphia to sexual abuse. Tapestry and photographs by WA reflected the core of her practice: the denial of harmful ideals of womanhood and bodily appearance. As a textile artist, she finds power in the traditionally overlooked ‘feminine’ practice of embroidery, subverting and updating its connotations. In the third room, Huang’s film A, beautifully conveys a loss of agency as her body is objectified, transitioning into common objects and appliances found within the home. Finally, projected onto the walls and so encompassing the last room, Valaydon’s audio-visual work Take Me Home immersed the viewer within fragmented images of the female body, encouraging the visitor to reflect on the objectification of women. Through a variety of media and forms, the show provoked visitors to reflect upon their own relationships with their bodies and vulnerability.