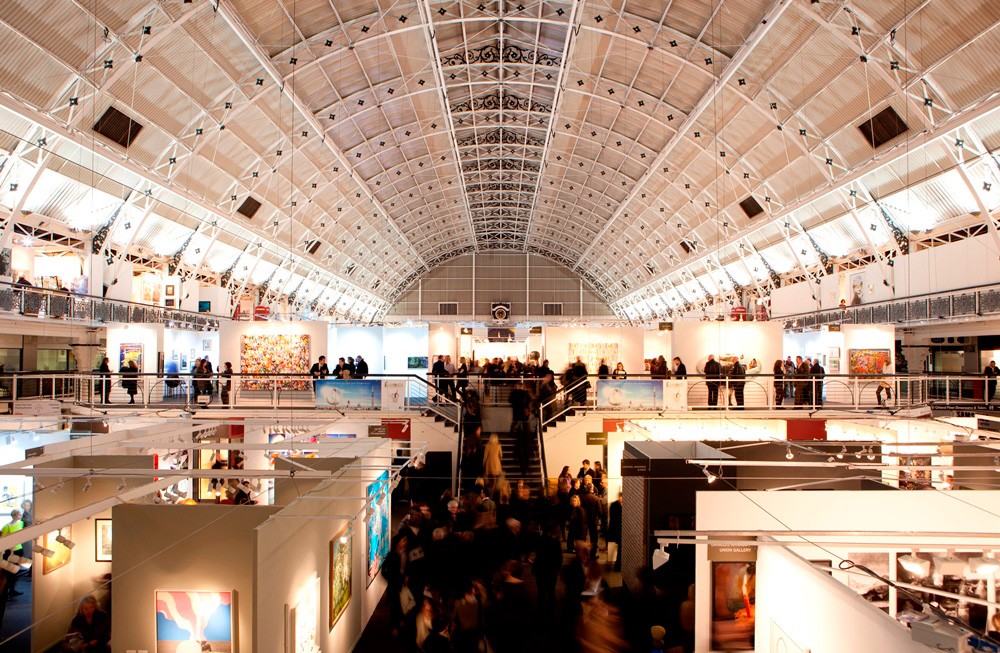 “Taking a critical approach to the ideologies behind the development of these [optical] instruments of guidance and surveillance, the artists consider how imperial gestures of discovery, revelation and possession are embedded in associations between seeing and understanding, light projection and enlightenment.”

Dr. Martin Waldmeier peers into the crowd searching for someone who can draw solid meaning from the above excerpt he just recited. The crowd giggles, confirming his theory that art terminology and speech has developed into a language that can be confusing and foreign to those who have not been trained as curators and gallerists.

As a consultant lecturer at Sotheby’s Institute of Art-London, Waldmeier often considers questions surrounding the language of curation: Who is the reader of today’s curating language? What assumptions are made about this reader? How did this language develop into what is seen in museums, galleries, and art fairs today? Waldmeier spoke about his varied hypotheses to these questions during in a panel discussion at the Bedford Square Festival. Here is a quick guide to some of his insights from that talk about why this new language developed:

It is about building technical terminology

Every field has a vocabulary that is unique to its research, publications, and conversations. Curating, like all fields, has this kind of jargon.

It is about positioning the curator as an author

The role of “curator” originally developed from editors who found a niche in writing about artwork for museums and galleries. As this position took on a solidified place in the art community, so did the necessity of developing the curator's voice and style as an author. The language that originated from this niche position allowed curators to gain traction in the global art community. On one hand, it is meant to tell a story from the creative lens of the author, but on another hand it is meant to reinforce the knowledge and intellect of the curator.

It is about continuing the legacy

There is a unique dialog that naturally accompanies the discussions of like-minded people. When communities of curators and students studying this subject come together, it is inevitable that this language will be perpetuated on to new generations of curators.

It is about developing a universal language for art

Language can serve to both distance and unite different entities. The language used by curators serves to create an international common ground for curators, establishing a standard for how to talk about art. Waldmeier suggests that perhaps the world should think of this as a new language in order to understand its complexities.

It is about creating a social distinction

Jargon has historically been used as a means of distinguishing oneself in social settings, creating an air of confidence and knowledge while discussing an elaborate subject.

It is about being part of an intellectual tradition

Intellectual tradition has originated from hundreds of years of art theory which has been written throughout time. Much of the language used today by curators has been based on the writing of theorists throughout history. To this point, Waldmeier notes that art theory is a subject with countless intricacies, which should never be oversimplified.

It is about meeting audience expectations

Waldmeier’s final hypothesis is based on some experimentation conducted within the classroom. He drafted two written pieces describing the same artist’s exhibition, one using the complicated language of curators and one using a more conversational structure. Students consistently chose the confusing jargon. Audiences have been conditioned to accept this language because it sounds intriguing and mystical, promising something interesting.

It is very important, Waldmeier concluded, to consider what curating language does to the audience. If curators write and speak clearly about art, it empowers the audience to understand and sharpen their own ideas about the work.

Watch the full video of the curating panel discussion from the Bedford Square Festival.