How Provenance Contributes to Trust: A Case Study of Klimt’s Portrait of Gertrud Loew at Auction

Home News & Events How Provenance Contributes to Trust: A Case Study of Klimt’s Portrait of Gertrud Loew at Auction 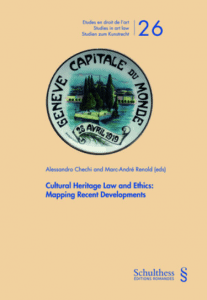 Excerpted from faculty Gareth Fletcher’s chapter in Cultural Heritage Law and Ethics: Mapping Recent Developments (edited by Alessandro Chechi and Marc-André Renold and published by Shulthess), the following is one of three case studies Fletcher uses to gauge the market’s response to provenance information for objects sold at auction.

Download the full chapter for more from Fletcher’s essay, “Scores on the Doors: Establishing a Certificate of Virtue Framework for Future Art Market Regulation.”

On 24 June 2015, Portrait of Gertrud Loew – Gertha Felsovanyi (1902) by Gustav Klimt was offered for sale at Sotheby’s Impressionist and Modern Art evening sale with a pre- sale estimate of £12 million to £18 million. The work was a commissioned portrait of his daughter, Gertrud Loew, by Dr Anton Loew in 1902 and to whom it passed by descent upon his death.

The work, but not legal title, was acquired in 1941 by the cinematographer and film director Gustav Ucicky, whom the Klimt Foundation believes to be the artist’s first illegitimate son. His daughter, Ursula Ucicky, inherited the painting in 1961 and bequeathed it to the Klimt Foundation in 2013, where it attracted an ownership claim from the heirs of the original subject, Gertrud Felsőványi (born Loew).

Title disputes often distort the market for cultural objects as the risk of uncertainty regarding ownership can disincentivise potential collectors. In this instance, however, the final piece of provenance information in the auction catalogue confirmed that the painting was a joint consignment from both the heirs and the Klimt Foundation, and quoted that an “ownership settlement (had been) agreed between the two parties in 2014”.

Although room exists to interpret the legal applicability of this information, it provided an assurance, but not a guarantee, to the market that legal title would pass to the purchaser through the auction process, and reinforced the idiosyncratic ownership narrative associated with the object. In addition, a future provenance was also indicated in the catalogue prior to sale, where it was revealed that the work had been requested for a forthcoming exhibition at a private museum in New York from September 2016.

To critically examine the impact of this provenance information on the market performance of the work is to identify its contribution to the perception of validation and trust associated with the transaction. This may have contributed to its subsequent performance at auction where it exceeded its high estimate by £4 million and achieved a hammer price of £22 million.

From a qualitative perspective, it is possible that the provenance information included in the catalogue note provided an element of reassurance to potential collectors, however, the retrospective identity of a previous owner does not always work to the advantage of the consignor.

Excerpted from: Fletcher, Gareth. "Scores on the Doors: Establishing a Certificate of Virtue Framework for Future Art Market Regulation." Studies in Art Law 26 (2017).

Gareth Fletcher is a Lecturer in the MA in Art Business Program at Sotheby’s Institute of Art-London. He is Co-Unit Leader of the Art Business, Foundations and Placement semester course, leader of the Art Crime and Art and its Markets summer study courses. He also lectures on Strategy and Risk Management as part of the Business Management in the Art World Executive Education program; Strategic Planning as part of the Business Management of an Art Gallery program, and the Contemporary Art Market as part of the Frieze Art Fair: Contemporary Art Today program. He has received a TECHNE AHRC scholarship to pursue his PhD examining the semiotics of provenance as institutional construct in the establishment of cultural and economic value in the market for Near Eastern antiquities. He received his MA, Sotheby's Institute of Art, London; his BFA and BA from University of Canterbury, New Zealand.