In the 1960’s, the idea of “art as investment” took hold and prospered into the $64 billion art market of today. In 1969, Sotheby’s Auction House launched what is now Sotheby’s Institute of Art, responding to the need for education on the business of art. Over the next fifty years, the program evolved alongside the growing needs of the growing industry, developing into a school with a distinguished faculty, campuses in London, New York, and Los Angeles, and a robust offering of graduate programs and shorter non-degree courses. Now, with the help of our expert faculty, we look back on the major developments of the past five decades to better understand the art market’s multibillion-dollar present and share projections for its future.

“If I had to choose one thing,” says David Bellingham, Director of our London Art Business Master’s program, when thinking about one key art market factor of the 70s, “it would be how art developed as an alternative investment asset.” It was during this decade that investors started looking at the benefits of collecting art and art responded by raising its prices. In 1972, The Met made a record-breaking (and controversial) purchase of a $1 million-dollar Greek vase, and Julian Schnabel’s paintings—from a sold out 1979 Mary Boone solo show—doubled in price in two years. As a result, the decade also saw the publication of Robert Projansky’s “Artist’s Contract” and an increased focus on helping artists legally outline resale rights.

The first Sotheby's auction in the Soviet Union, 1988

In 1987, the movie Wall Street features artists like Francesco Clemente and provides the perfect distillation of 80s international consumerism and postmodernism. The excess and bull market associated with most of the decade extended to all corners of the art industry with sale numbers that exceed expectations. Japanese collectors set record-high prices for Impressionist art, while Sotheby’s sets a new Van Gogh benchmark with a $53.9 million sale and goes to Moscow to launch a sale of Russian avant-garde and contemporary art. “This is a time where auction houses begin to establish global partnerships to expand their selling footprint,” says Ann-Marie Richard, Director of the Institute’s MA in Fine and Decorative Art and Design program in New York.

The revolutionary strides in technology that marked the 90s were likewise responsible for striking changes that occurred in the art market. From the rise of organizations like artnet—which led to the democratization of market information and research, to eBay—which disrupted traditional means of selling art, the course of the industry was changed forever, shared Richard. And this also changed the face of the industry, as Bellingham explained. The 90s are associated with high-profile exhibitions staged and promoted by former marketing guru, Charles Saatchi, such as those of Young British Artists (YBAs) including a rising star by the name of Damien Hirst. 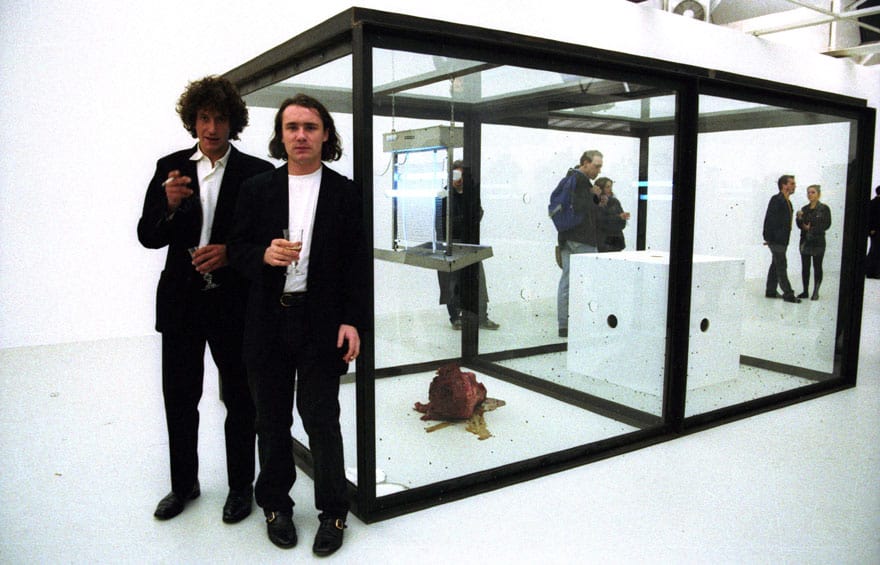 Damien Hirst and Danny Chadwick photographed with Hirst’s 1990 work A Thousand Years, at Young British Artists I, a group exhibition at the Saatchi Collection, London, March 1992.

2000s: The Rise of Contemporary Art

“The opening of Tate Modern in 2000 combined with the financial boom ushered in by the new millennium led to a massive and increasingly popularist interest in global post-war and contemporary art,” says Bellingham. And despite the global recession that also became synonymous with this decade, the art market continued to grow. Thanks to Chinese billionaires, oligarchs from the former Soviet bloc, magnates from the Middle East, and high-net worth individuals from Silicon Valley, record sales of Post-War and Contemporary Art could be seen almost every month.

Reflecting on the decade that is soon to be history, the role of the Internet and technology came out on top. “The greatest shift in the past decade is the role of technology in the art market—from the sharing of collections, artist information, pricing data, art historical information, to its role in the buying and selling of art,” says Christine Kuan, Sotheby’s Institute of Art-New York CEO and Director. As a result, during the last nine years, the art market’s reach extended to every corner of the globe and to collectors at every price point, transforming a traditionally inaccessible industry.

“I think the total collapse of traditional boundaries and collecting categories—Old Masters selling in contemporary sales, design alongside painting, commercial and non-commercial content in the same exhibitions and online platforms, artists as curators and vice versa, business as art and art as business, science and art, and the breakdown of geographical barriers.”—Christine Kuan, Director/CEO of Sotheby's Institute of Art-New York

“More online sales as technology develops and gives access to components of documentations so to purchase with trust. Also, a rise in bespoke sales in the traditional sense. And hopefully a return for an appreciation of historic pieces—as recycling and a greener way of consuming is imperative to save our planet.”—Ann-Marie Richard, Director of MA Fine and Decorative Art and Design, New York

“The new millennial fashion for ‘cross-collecting’ of cultural as well as natural objects from all periods and global regions will continue, leading to a breakdown of both traditional art market sectors and the privileging of oil paintings and sculpture. More and more art dealers will become interior design advisors.”—David Bellingham, Director of MA Art Business, London