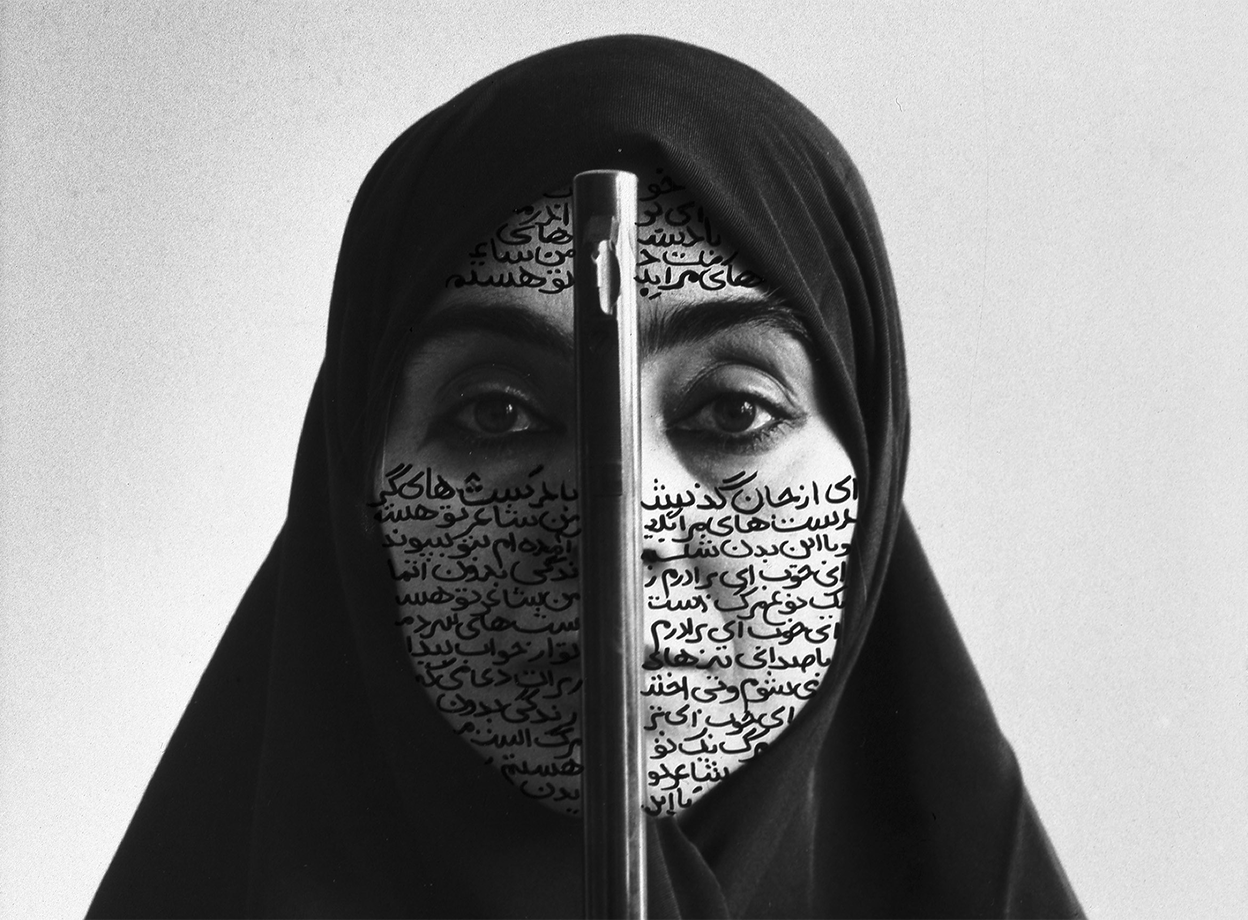 Sotheby's Summer Institute is pleased to present Artist Speaker Series, four conversations with artists working in various media. This event will be a conversation between Shirin Neshat, Shoja Azari, and Phong Bui.

Video and installation artist Shirin Neshat (Iranian, b.1957) explores the political and social conditions of Iranian and Muslim life in her works, particularly focusing on women and feminist issues. Neshat was born in Qazvin, Iran, and left the country to study art in the United States at 17; she graduated from the University of California, Berkeley with an MFA in 1982. When she returned to her home country in 1990, she found it barely recognizable from the Iran before the 1979 Revolution, a shocking experience that incited the meditations on memory, loss, and contemporary life in Iran that are central to her work.

Her Women of Allah series, created in the mid-1990s, introduced the hallmark themes of her pieces through which she examines conditions of male, female, public, private, religious, political, and secular identities in both Iranian and Western cultures. Her videos, installations, and photographs have received great critical acclaim outside of Iran. Her work has been exhibited at the Venice Biennale, the Istanbul and Johannesburg Biennials, the Art Institute of Chicago, the Whitney Museum of American Art in New York, and the Tate Gallery in London, among other institutions. Neshat currently lives and works in New York. Shirin Neshat: I Will Greet the Sun Again, a survey of 25 years of the artist's work, will open at the Broad Museum in Los Angeles in October 2019.

Shoja Azari
Shoja Azari is an Iranian-born visual artist and filmmaker based in New York City. He is known for films such as, Women Without Men (2009), Windows (2006) and K (2002) based on 3 of Franz Kafka's short stories ("The Married Couple," "In the Penal Colony" and "A Fratricide").

In his work, Azari confronts broad themes of gender, politics and piety, drawing inspiration from and re-interpreting religious icons. While collaborating with Neshat on a wealth of film and video projects, Azari created experimental and art house films, including an adaptation of Franz Kafka’s work, called K (2000) and a series of short films, Windows (2005). Windows premiered at the Tribeca Film Festival, bringing him into the public eye. Azari and Neshat’s film Women Without Men won the Silver Lion for best director at the 2009 Venice Film Festival. Azari has since developed a style of “video paintings” that combine media to produce a unique three-dimensional effect. He has partnered with artist Shahram Karimi on a variety of multimedia projects.

Azari’s work has been exhibited globally, with solo shows throughout Europe and North America; his first solo show was at Leila Heller Gallery in 2010. Azari has participated in exhibitions at the Venice Biennale, at museums such as Germany’s Haus der Kulturen and the MUSAC in Spain, and at art fairs including Art Basel, Switzerland, ARCO, Spain, and Art Dubai. His works are in the permanent collections of various museums and foundations, including the Museum of Contemporary Art (MOCA) in the United States, and the Farjam Collection in the UAE. He lives and works in New York.

Phong Bui
Phong Bui is an artist, writer, independent curator, and the Publisher and Artistic Director of the Brooklyn Rail and the publishing press Rail Editions. He is a board member of theThird Rail of the Twin Cities, the Miami Rail, the Louis Comfort Tiffany Foundation, the Sharpe Walentas Studio Program, the International Association of Art Critics United States Section (AICA USA), Anthology Film Archives, Studio in a School, Second Shift Studio Space of Saint Paul, among others. In 2013 he founded Rail Curatorial Projects, which aims to curate group exhibits that respond specifically to location, cultural moment, and economic conditions. In 2017, both the River Rail (a free annual publication that focuses on environmental and climate change issues) and Occupy Rail (an ongoing endeavor to encourage and support motivated individuals to create their own Rail publication in their local communities) were founded to facilitate and provide critical dialogues of how the arts, politics, and culture are integral parts of the common wealth of the greater public. He recently co-founded the Graphyne Foundation, which aims to curate ongoing exhibitions and public programing in collaboration with Mana Contemporary in Jersey City, Chicago, and Miami, among other museums of contemporary art in the U.S. and abroad. Recent projects include the River Rail: On Puerto Rico; Artists Need to Create On the Same Scale As Society Has the Capacity to Destroy: Mare Nostrum, one of the official Collateral Events of the 2019 Venice Biennale; a continuation of this exhibition titled Occupy Colby: Artists Need to Create On the Same Scale As Society Has the Capacity to Destroy, Year 2, at Colby Museum in Waterville, Maine as part of his being a 2019 Lunder Fellow at Colby College; and the upcoming Jonas Mekas: A Retrospective.

* This event is open to the SIA community of alumni, students, prospective students, faculty, and friends. Please note that seats are limited and are on first come first served basis.